Last week I had the pleasure of attending the Re-imagining Education for Democracy Summit. It was a wonderful event and an absolute pleasure to connect with passionate educators from all over Australia, each of whom was there because they felt that it is worth discussing how education can improve democracy in these turbulent times. Corinne Campbell has storified the #RE4D twitter feed if you’d like to retrospectively experience the conference.

With my paper: ‘Digital identity in a ‘post-truth’ world: the case for digital ethics‘ I talked through some ideas that I’ve been mulling over for a while.

My abstract: That ‘post-truth’ is the Oxford Dictionary’s word of the year for 2016 suggests that civil and civic discourse has been undermined by factors such as social media, the plethora of available information sources and the decline in the trust of ‘experts’. The increased penetration of social media in people’s lives has made a digital identity a necessity for participation in many aspects of society, yet the corporate ownership of much “public” digital space distorts digital identity in ways that are detrimental to civic engagement and democratic participation. Much of the history of philosophy has been about generating ethical communicative norms that foster democracy and civic engagement, a role traditionally undertaken by schools in modern societies; However, while schools have been striving to provide students with the skills to participate in our increasingly digital society, there limits to what has thus far been achieved. In order to further the democratic ideals of schooling, fresh engagement with old ethical debates is required. Applying a philosophical lens to the issue of democracy in an increasing digitally mediated world, this paper makes the case for the development of new forms of digital ethics for schooling in contemporary society. Given the technological transformation of society, it is argued that digital ethics are required as the basis of a transformative curriculum.

I challenged myself not to do my usual thing of using the powerpoint as a crutch when public speaking, and so rather than reading from the powerpoint I used it to supplement my argument visually, using memes and cartoons. Given I that I was talking about digital culture, it seemed appropriate to use digital culture to illustrate was I was saying. 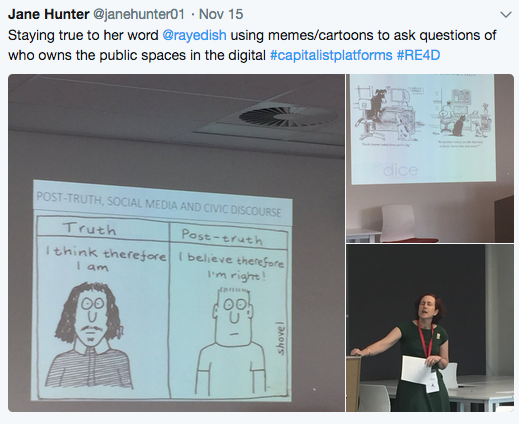 It was a lot of fun to cut the safety net and not speak to the text of a powerpoint, so I think that this will change (for the better) the way that I lecture. (Yes, the lecture is not quite dead and where I teach is it still expected that students front up for a weekly lecture). 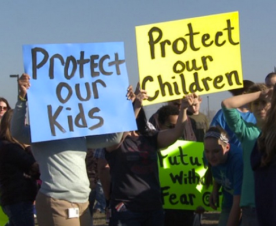