This post is a part of a series being written for my EDUC6352 online masters students.

Historical background: School funding is a perennial policy problem and the original Gonski model (circa 2013) cemented Labor’s reputation for being the party concerned with education. Tony Abbott committed the Liberal party to matching Labor’s education plan dollar for dollar at the eleventh hour in the 2013 election. And, once the Liberal party won that election, they matched the funding for the first funding cycle but without committing the states (except for NSW who’d signed a deal with the outgoing Labor party) to the conditions of the Gonski plan (ie. needs based funding – the funds needs to be distributed according to a particular model that adds loadings to a base level according to levels of disadvantage). 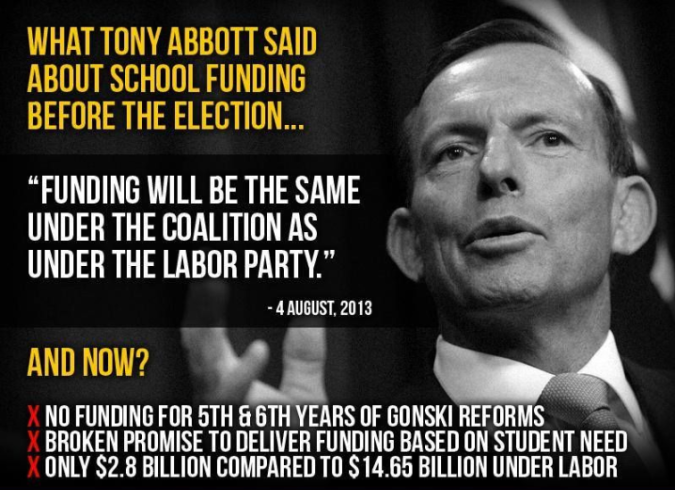 In order to neutralise school funding as an election issue the Liberal party have introduced their own funding model, dubbed Gonski 2.0. Sensationalist media reporting (Private schools getting $6700 more per student than NSW public schools; Richest private schools get payments from $7m government ‘slush fund‘; Funds bias hurt Catholic schools) have made it hard to determine the differences (in effect rather than in dollar terms) between the original Gonski model and Gonski 2.0.

From what I can glean, however, in terms of realpolitik, Gonki 2.0 may have advantages. It enshrines an 80:20 funding arrangement in legislation, replacing previous ad hoc, opaque, confusing funding agreements. Here is some of the analysis available:

The Conversation provides the following analysis:

Government schools in all states, and in the ACT, will get more Commonwealth funding.

Based on the new six-year timeframe for underfunded schools, our latest modelling suggests government schools in NSW will get between $200 million and $300 million more federal funding over the next four years. For Victoria, the boost is between $300 million and $400 million. Both Queensland and South Australia appear to get between $100 and $200 million extra. The boosts for government schools in Tasmania and the ACT are smaller in dollar terms, but still substantial per student.

Government schools in the Northern Territory will lose compared to their current level of Commonwealth funding, which is higher than other jurisdictions – but a transition package has been provided.

Catholic schools are right to say they will be worse off than under the 2013 Act. Their federal funding is projected to be $3.1 billion less over the next ten years.

This loss arises mainly from the interaction of two changes to the capacity-to-pay measure. The first is the removal of the generous “system weighted average” in the capacity-to-pay measure, which treated all Catholic schools as average rather than basing their funding on each school’s parent body. The second change is to the curve used to calculate parents’ capacity to contribute in primary schools. The previous curve had limited how much parents were expected to contribute in even quite advantaged primary schools.

The loss is biggest for ACT Catholic schools, which will see virtually no funding growth for a decade.

A core complaint from the Catholic leadership is that the socioeconomic status (SES) score disadvantages Catholic schools. Accordingly, one of the first jobs of the new National Schools Resourcing Board will be to review the SES scores. The final impact on Catholic schools will depend on the findings of that review.

In the meantime, a one-off transition package of around $50 million over the next year will be delivered to help “vulnerable” Catholic and independent schools adjust to the new arrangements.

The impact on independent schools is mixed. Those serving low socioeconomic communities are winners. A handful of (mostly wealthy) private schools will have their overly generous funding arrangements whittled back.

From a policy analysis perspective we need to keep on eye on how the states react and whether funding is matched across the states for public schools and, what is meant by “Lastly, Gonski 2.0 creates a stronger link between Commonwealth funding and agreed national initiatives to improve student performance“. Which initiatives are being referred to here, what are the accountability measures attached to these, and what impact will these have on the practice of schools, teachers and school leaders?

Gonski 2.0 is not sector blind as it stipulates how much the federal government will contribute to each sector. It is all not needs based if SWD are not being adequately funded. While it is a funding model that provides clarity and transparency it doesn’t seem that it can be called “needs based” funding, unlike the previous iteration that it is replacing.

One thought on “Making sense of Gonski 2.0”